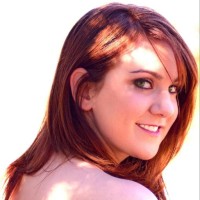 BC Pucktress: An NHL Guide For NBA Lockout Losers

Busted Coverage NHL correspondent Jessica Redfield (@JessicaRedfield) approached us this week about a piece welcoming you NBA rejects into her world of hockey. When told the post wouldn't run until Friday, she made sure to jab us with, "You better hope the lockout doesn't end before then." Pfft, this is David Stern we're talking about. Anyway, Jessica (pictured) is all about chatting about hockey with you turds. JUMP!

She's back from a weekend in Vegas where she partied well into the morning, returned to Denver with broken toes and her Sin City virginity left behind. BC Pucktress, Jessica Redfield, filed her Stanley Cup predictions yesterday before the first puck dropped but we were at a Detroit airport bar watching Tigers-Yankees Game 5 and totally forgot to hit publish. See how Jessica came up with Islanders-Canucks for the Cup. JUMP!

For those of you sleeping and not realizing that the NHL season is just around the corner, time to wake up. NHL rookies are already scraping in preseason games, the Stanley Cup is done with its tours of Boston and the sport could see a huge spike in viewership thanks to the NBA lockout. BC hockey correspondent Jessica Redfield breaks down the Twitter accounts you must be following this NHL season. Freshen up, boys, you just might become a hockey fan this winter. JUMP!

Jeremy Roenick has been going to war today with Philadelphia Flyers' fans over comments made on Jay Mohr's show, Master Debaters. Roenick said something about the fans being crazy sons of bitches and all hell broke loose. The NHL great has been busy defending his comments as Billy down by the Delaware River docks has been bashing him. Guess who BC's new NHL correspondent, Jessica Redfield, is supporting in this fight? JUMP!

Most of you never thought the day would come when a chick would actually want to write for BC. The day is here. Say hello to our new NHL correspondent, Jessica Redfield. She's 23, was born in Michigan, raised a Texan & is looking to leave her mark on the blogosphere. That doesn't mean you idiots need to harass, constantly ask her out on a date or remark that your hockey team needs a massage therapist. Tonight, a single Jessica tackles NHL hockey & how she likes her men.